It is a traditional part of the Rising Star series, the European Concert Hall Organisation's showcase of young artists, to feature in its concerts instruments that are only rarely the centre of attention in solo and chamber music performances. This time, the audience will get to discover the diverse range of possibilities of the trumpet.

'What fireworks of never-before-heard effects! What a plethora of rhythms, colours, sounds and melodies!' enthused jury member Eleonore Büning, after hearing the 24-year-old Simon Höfele's playing at the 2018 German Record Critics' Award, in what happened to be a performance of Ligeti's Mysteries of the Macabre, the same piece the Darmstadt-born trumpeter will be playing at Müpa Budapest.
The young artist was seven years old when he started to study the craft of playing his instrument, and... he has since won numerous awards and appeared as a soloist with such ensembles as Amsterdam's Royal Concertgebouw Orchestra, the BBC Philharmonic Orchestra, the Berlin's Konzerthaus Orchestra, the Munich Chamber Orchestra and the Mahler Chamber Orchestra. His concert programme will naturally consist primarily of 20th-century works, as the classical composers of previous centuries, despite featuring it in the occasional concerto, did not really make much use of the trumpet in chamber music. The composer of this one of the Rising Stars concerts' unmissable world premières is the Czech Miroslav Srnka: born 44 years ago in Prague, he completed his studies in his homeland and then went on to further hone his skills in Berlin and Paris. 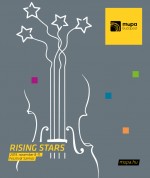