For some half a century, the Orchestre de Paris has played a defining role on the French and international music scene. The years following its foundation saw Charles Munch, Herbert von Karajan and Georg Solti shape the orchestra's profile as we know it today. Estonian-American conductor Paavo Järvi is the eighth contracted music director of the Paris-based ensemble, having filled the role of principal conductor since 2010. The orchestra will perform an unusual selection of music for this ...Budapest concert, which features one of the outstanding cellists of our day in the form of Sol Gabetta.
The programme comprises works by emblematic figures of both Estonian and French music. World-renowned Estonian contemporary composer Arvo Pärt celebrates his 80th birthday in September 2015. The work to be heard at this concert - which carries the subtitle Hommage à Gustave Eiffel - was commissioned by the orchestra and its music director in 2009. Camille Saint-Saëns‘s notoriously difficult Cello Concerto No. 1 is one of the composer's best-known works, albeit one rarely heard in Hungary. The piece also has a link to the French orchestra, having been premièred by its predecessor in 1873. The Symphonie fantastique by Hector Berlioz might more properly be named a fantasy-symphony as it leads the listener into a world of the imagination. Music history views France's leading Romantic composer as an orchestral innovator to rank with Beethoven in importance, and this masterpiece exploits the exciting opportunities inherent in the symphony orchestra with unrivalled brilliance. 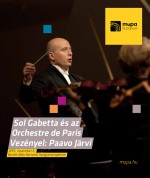