It is a tradition at the Budapest Wagner Days festival to offer the audience, along with the fully staged and semi-staged musical dramatic works, productions in other genres as well. One such regular treat at the June festival is the song recital. To use an analogy that fits here, these concerts have two "leitmotifs": one is the exploration of the repertoire from Wagner's era, the other is for the performer of the songs to be a singer who is familiar from the opera stage. These two aspects will be key at René Pape's recital as well.

The "black diamond bass" was born in Dresden, then part of East Germany, in 1964. This city, like Leipzig and East Berlin, managed to preserve its musical culture to an unrivalled standard even under the deadened decades of communist rule. As a child, for example, Pape received his early musical education between 1974 and 1981 in the Dresdner Kreuzchor. In the early '80s, he attended the Dresden Conservatory before making his operatic debut in 1988 at the Staatsoper Unter den Linden in Berlin. N...evertheless, the young singer would only start down the path of international success after the fall of the Iron Curtain, and we are proud to report that it was one of our fellow Hungarians, Georg Solti, who brought Pape's bass voice to the world's attention when he invited him to sing Sarastro in a production of The Magic Flute he was conducting. From there, his career sped up and his fame spread with appearances in cities like Milan, Paris, Chicago, Vienna, Basel, Bayreuth and New York. Pape has conquered the entire operatic bass repertoire and can count Nikolaus Harnoncourt, Claudio Abbado, Wolfgang Sawallisch, Daniel Barenboim, Kent Nagano and Antonio Pappano among the most important conductors he has partnered with. One of the defining basses of our time, he is welcome everywhere he goes - just like at his song recital at Müpa Budapest. 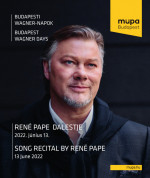