We are delighted that Müpa Budapest is reopening its doors. In line with feedback from our audience and our research with regard to reopening, and with our audiences sense of safety in mind, it will be compulsory to wear a mask - both in the public spaces and in the halls, and tickets will be sold with empty spaces to allow appropriate social distancing. Entry to the Müpa building is restricted to those with valid immunity certificates in a compliance with current legal requirements.

We appreciate your understanding and cooperation in ensuring the gradual reopening of the venue takes place in a manner that is acceptable for all. We look forward to seeing you at Müpa Budapest performances soon!

Many people consider Elīna Garanča to be the greatest Carmen of our time. Hailing from the tiny country of Latvia, which has nevertheless supplied the world with many important artists, Garanča wowed audiences at New York's Metropolitan Opera in 2010 with her portrayal of the unbridled Gypsy girl. Now we'll get to see her at Müpa Budapest as well! In the first part of her concert, she will be performing a cross section of Bizet's famous opera. In the second, we will hear excerpts from... operas by Verdi Puccini and Rossini, as well as Spanish zarzuelas and famous Mediterranean melodies. We have a night of remarkable harmony to look forward to, as the conductor for the evening will be none other than: the British/Gibraltarian Karel Mark Chichon.
Garanča commenced her music studies at the music academy in her native city of Riga before honing them in Vienna and, later on, in the United States. She did some important early work in Meiningen and Frankfurt and won her first major international competition in Helsinki. These triumphs all took place in the '90s. Her breakthrough came later, in 2003, when she sang in a performance of La clemenza di Tito at the Salzburg Festival under the baton of Nikolaus Harnoncourt. This led her straight to Vienna, Paris and New York. In the French capital, she got the chance to work with the likes of Patrice Chéreau. Today, she is one of the biggest stars in the world and a regular guest at the world's leading opera houses. Her repertoire includes the most important mezzo-soprano roles from the operas of Mozart, Rossini, Bellini, Donizetti, Verdi, Wagner, Berlioz, Massenet, Richard Strauss. Joining her here in Budapest will be several Hungarian partners - Polina Pasztircsák, Boldizsár László, Csaba Szegedi - and some international ones as well, in the form of the Chilean tenor Jonathan Tetelman and the Lithuanian bass-baritone Kostas Smoriginas. 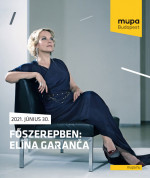