The life of Henryk Szeryng, who was born exactly 100 years ago on 22 September 1918, constitutes one of the most interesting careers in the history of music. Born into a Jewish family in Warsaw, the wunderkind learned to play the violin from the very greatest: from Carl Flesch in Berlin and Jacques Thibaud in Paris, where he also studied music composition under Nadia Boulanger. This promising career was interrupted by World War Two, when General Władysław Sikorski, premier of the Polish go...vernment in exile, made the young violinist and speaker of seven languages a liaison officer and interpreter. During this same period, he also gave more than 300 concerts to Allied troops all over the world, so he did cut off ties completely with his instrument. When one of Sikorski's trips resulted in Mexico giving 4,000 Jewish refugees the opportunity to settle there, Szeryng was so moved by the gesture that he took Mexican citizenship, which he retained until his death.
A coincidental meeting returned him to the international concert scene. In 1954, Arthur Rubinstein played a concert in Mexico City. Szeryng paid him a visit and ended up playing Bach for him in Rubinstein's hotel room the night after the concert. The refinement and intensity of Szeryng's playing hit the pianist like a bolt of lightning. In the following three years, he became one of the most sought-after violinists in the world, respected particularly as a performer of Bach and winning numerous awards. He died in 1988, and his gravestone in Monaco was engraved with the closing bars of Bach's Chaconne.
Paying tribute to the great Polish musician's legacy are two young violinists: Hungary's Kristóf Baráti and Poland's Jakub Jakowicz will alternate in playing Johann Sebastian Bach's bible for violinists, the three solo sonatas and three solo partitas.

Commissioned by the Adam Mickiewicz Institute as part of the Polska Music programme and POLSKA 100 - the international cultural program celebrating 100 years of Polish Independence. Financed by the Ministry of Culture and National Heritage of the Republic of Poland as part of the multi-annual programme NIEPODLEGŁA 2017-2021. 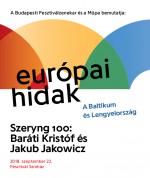