"Besides being one of the world's greatest tenors, José Cura is a polymath, a Leonardo da Vinci of our time,” reads a testimonial on the tenor's website. Indeed, as well as indulging in his other great passion of conducting increasingly frequenty, the Argentine singer is also a composer.

This concert gives us the opportunity to immerse ourselves in the full musical universe of José Cura - while listening to his three most significant oratorical works. While he himself conducts the Modus and Magnificat, he sings the part of Christ in Ecce homo. At this concert held to honour the 25th anniversary of the establishment of the Salva Vita Foundation, Cura shares the stage with the Hungarian Radio Symphony Orchestra, Choir and Children's Choir, four outstanding vocal soloists in ...the shape of Zita Váradi, Krisztina Simon, István Horváth and Marcell Bakonyi - and, conducting Ecce homo, Mario De Rosé.
Cura wrote Ecce homo in 1989 after taking part as a member of the chorus in a performance of the St Matthew Passion. "I was literally in shock, stunned. I later conducted this work myself and Bach settled deep in my head. I decided to pass on a Biblical story of my own but I shifted to a more dramatic composition in a harsher world. After all, two thousand years ago Christ was considered a criminal.”
"I was 25 years old when the Pope declared the Marian Year. My wife happened to be expecting for the third time. It occurred to me that Mary was still a teenager when she gave birth, and this whole story must certainly have been shocking for her.” The Magnificat begins with Mary sitting alone in the desert. Cura's message can be summarised by saying that, as long as a person is alone, they can achieve nothing. Collaboration is needed in order to accomplish anything.
The world première of the Modus was in Prague, and the work was inspired by the Czech capital, or more precisely by mediaeval Prague. In this ten-minute piece, orchestrated by Cura himself, he summarises the inspirational impressions he has drawn from the city. 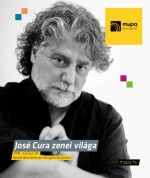