One of the most exciting opportunities afforded to us by historical performance of early music is when, like modern-day Columbuses on voyages of discovery, we embark into the fascinating and inviting realms of the Musical Unknown. And truth be told, these unfamiliar musical landscapes remain plentiful today. What do we in Hungary know of the Catalan Renaissance? At this concert, we will certainly have the chance to discover a lot. What, for example, is an ensalada? Some kind of salad? Well, yes, it is a kind of musical "salad,” a piece which - similarly to a quodlibet - combines a variety of familiar melodies.

The Palau de la Música Catalana is a stunningly beautiful, richly decorated concert hall in Barcelona, built between 1905 and 1908. The Cor de Cambra del Palau de la Música Catalana is the chamber choir of this institution, which since its foundation in 1990 has collaborated with conductors including Bertrand de Billy, Frans Brüggen, Lawrence Foster, Christopher Hogwood, Sigiswald Kuijken, Gustav Leonhardt, Jesús López-Cobos, Peter Maag, Neville Marriner, Gianandrea Noseda, Helmuth Rilling and J...ordi Savall. Their concert at the Early Music Festival will provide the Müpa audience a taste of the vocal repertoire known as the Catalan Renaissance, an event that counts as absolutely special for a concert hall in Hungary. The evening's programme features the works of composers such as Pere Alberch Vila, Lluís del Milà, Joan Brudieu, and both the elder and younger Mateo Flecha (Mateu Fletxa in Catalan) - all of whom lived and worked in the 16th century. The singers will be joined by an ensemble of players of unusual instruments, while the production will not be without some elements of musical theatre. 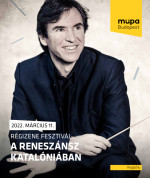 The Renaissance in Catalonia Details