This international choral festival takes place of the third time from 18 to 21 May and will welcome more than a thousand singers from all over the world. In addition to the gala events in the concert hall, the programme features festival concerts, communal singing and workshops, and the return of the midnight choral concert.

This concert features a version of Handel's oratorio never before heard in Hungary, representing a transition between the centuries-old tradition of performance... on a monumental scale and the historically informed performance method applied from the 1970s onwards. The orchestration associated with the name of Sir Eugene Goossens still demands a large symphony orchestra and choir by today's standards. Continuing the decade-long tradition of A Nation in Song, the concert will see Hungarian choirs joined by singers from abroad.

The program is organised on behalf of the Public Foundation for Research on Central and Eastern European History and Society within the framework of the Hungarian Presidency of the Visegrad Group 2017/2018. 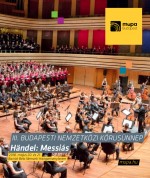