We are delighted that Müpa Budapest is reopening its doors. In line with feedback from our audience and our research with regard to reopening, and with our audiences sense of safety in mind, it will be compulsory to wear a mask - both in the public spaces and in the halls, and tickets will be sold with empty spaces to allow appropriate social distancing. Entry to the Müpa building is restricted to those with valid immunity certificates in a compliance with current legal requirements.

We appreciate your understanding and cooperation in ensuring the gradual reopening of the venue takes place in a manner that is acceptable for all. We look forward to seeing you at Müpa Budapest performances soon!

Do you recall the triumphant concerts that the 'three tenors' gave all over the world? The sound of the trumpet is no less brilliant and soaring than the voices of those tenors. As for Hungarian trumpet virtuosos, quite a few of them are absolutely world class and play with the world's greatest orchestras in the most famous concert halls around the globe. This evening's programme will exploit this abundance by featuring one, two, four and even six (six!) trumpets playing together at once i...n various concertos and transcriptions of works originally written for other instruments. Anyone who attends this concert can count on a remarkable musical experience!
The musicians at this performance are exceptional internationally acclaimed artists. Gábor Boldoczki has played at the Salzburg Festival and performed as a soloist with Kremerata Baltica, and he also premièred Krzysztof Penderecki's Trumpet Concerto. His former student, Tamás Pálfalvi, now also teaches at the Liszt Academy and has enchanted the audiences of countless concert halls from New York's Carnegie Hall to Suntory Hall in Tokyo. As for Gábor Tarkövi and Gábor Richter, one could list their multitude of successes as well, but perhaps it is sufficient simply to mention the most important thing: Tarkövi served as the Berlin Philharmonic's principal trumpet for many years and Gábor Richter has been the first trumpet player of the Gewandhaus Orchestra in Leipzig since 2006, meaning that both of them have regularly worked with the world's leading conductors. Gábor Rónai and Dénes Seidl are highly talented young trumpeters, about whom we are sure to hear more in the future. This backbone of this concert programme accompanied by the - over recent years, increasingly youthful - Franz Liszt Chamber Orchestra is Baroque music by Corelli, Tartini, Vivaldi, Torelli, Franceschini, Rebel and Stölze, with the novelties being a 20th-century virtuoso piece by Robert Erickson. 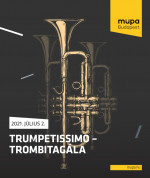