German and Hungarian performers and composers with Bartók as a backdrop - this might be one way to describe the essence of this concert in just a few words. In keeping with the Bridging Europe festival's Berlin-Budapest theme, contemporary trumpet ensemble works will be performed in the first half of the concert by two young trumpet phenomena, Tamás Pálfalvi and the German Simon Höfele, while the second will feature Bartók's piano cycle 15 Peasant Songs in an excellent arrangement for big band by the Modern Art Orchestra, with solos by Kornél Fekete-Kovács and Tony Lakatos, who alone embodies the German-Hungarian bridge.

Bartók not only defines the second half of the evening, but also the Hungarian works heard in the first half. The 2020 New Hungarian Music Forum Composers' Competition-winning pieces - works by Dániel Dinyés, Marcell Dargay and Balázs Horváth - all took Bartók as their points of departure. The works borrow motifs and are built on musical thoughts from the composers' great forerunner to create a new world of sound in which the influence of Bartók cannot necessarily be traced. It is a similarly st...imulating game one of the most sought-after German composers of our time, Matthias Pintscher, plays with tradition. The work, Occulation, by the music director of the legendary French orchestra, Ensemble Intercontemporain, features a solo trumpet and solo horn, and will close the first half of the concert. The Bartók adaptation to be heard in the second half of the concert is more than just an instrumental arrangement: The Modern Art Orchestra's version connects the individual movements with free improvisation, thereby creating a link not only between the individual folk songs, but also between improvised and written music, reversing the process by which Bartók gave living folk songs their permanent form on paper. 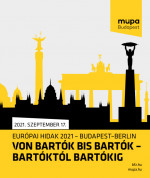