Literature and life both can have an extraordinarily powerful, and parallel, impact on music. While fleeing from his creditors in a sailing vessel, Wagner experienced the force of a terrible gale that stirred his recollection of the story he'd read of a cursed ghost sailor compelled to atone for his sin by wandering the seas until Judgement Day. All of this, naturally, would evolve into a Romantic opera.

Richard Wagner's oeuvre contains a few key concepts - or, to borrow a word from the composer's own set of creative tools, "leitmotifs”. One of these, perhaps the most important of them all, is that of redemption. The sinner, who has gone astray, longs for redemption, and the redeemer is in more than once case a woman. What could redeem the man if not the power of love and steadfast fidelity? Der fliegende Holländer, in chronological terms the earliest of the ten operas that make up Bayreut...h's Wagnerian canon, has all the magical immediacy and ballad-like compactness of these early, yet still mature, works.
Müpa Budapest's initial decision to stage the opera in 2015 was made doubly courageous and outward-looking by two factors: first by choosing the 1841 one-act version, and secondly, by assuring its free-spiritedness by inviting the innovative-minded Balázs Kovalik to direct it. Highly respected in the international opera world for his novel reinterpretations, Kovalik truly took an original approach to the story, presenting the title character as a metaphor for an artist. The Chinese bass Liang Li is acclaimed as both an opera and a concert singer. Elisabeth Strid is a regular guest of the world's opera houses, and has also performed at the Bayreuth Festival. Critics lavish praise on the powerful voice and soft tones of American tenor Ric Furman, while the repertoire of Bernadett Wiedemann includes both Verdi's dramatic mezzo-soprano roles and Wagner's alto heroines. Franz Gürtelschmied launched his career at the Salzburg Festival in 2014 and the key Wagnerian roles of Sweden's John Lundgren include the title role in The Flying Dutchman, as well as Wotan and Alberich. 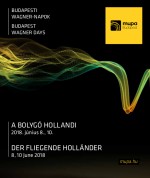