The acclaimed cast of performers for the last evening in the tetralogy is joined by a world-class Wagnerian singer whose name all but predestined her to play the part of Brünnhilde's warrior sister. There is no leading opera house in whic...h Waltraud Meier has not performed, nor any great Wagnerian conductor with whom she has not worked - Abbado, Barenboim, Levine, Maazel, Mehta and Sinopoli, to name but a few. At the Bayreuth Festival, the Mecca of Wagner's music, she performed on no less than 23 occasions between 1983 and 2000, sometimes taking on roles in two operas.
In what promises to be an extraordinary closing performance, Siegfried is played by Stefan Vinke, who earned the title of ”superstar” for his portrayal of the hero stripped of his memories in the Seattle Opera's 2013 production of The Ring. Critics enthused over not only his tireless voice, but his powerful stage presence and inventive interpretation of his character. Iréne Theorin played Brünnhilde in the joint production of The Ring by the Berlin State Opera and Milan's La Scala conducted by Daniel Barenboim, and was also seen for years on the Green Hill at Bayreuth in productions under Christian Thielemann and Ádám Fischer. The Hungarian conductor stood on the podium for four consecutive years between 2001 and 2004 to conduct the tetralogy from the distinctive orchestra pit of the Bayreuth Festspielhaus, and has since managed to convince numerous Bayreuth guest artists to perform at the Budapest Wagner Days thereby securing additional prestige for this unique initiative of the Müpa Budapest.
This recording was made at a concert held at Müpa Budapest on 14 June 2015. 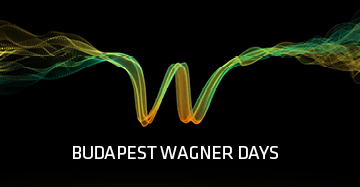