"His vocal stamina stands every test, his technique is faultless - wondrous in its phrasing - and his musicality, it goes without saying, is sensitive and high in calibre,” wrote one critic of the portrayal of Tannhäuser by Robert Dean Smith at Müpa Budapest in 2012. The American star is one of the most sought-after Wagner singers today and has performed many of the composer's most important tenor roles, appearing at the Bayreuth Festival for an unusually long time between 1997 and 2012. 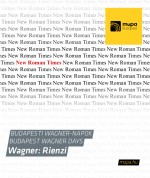