When researching the history of the development of a great artist, it is always exciting to get to know the works that emerged in the period before they developed a mature style. In Wagner's ouevre, Rienzi is just such a work, one that is more mature than his early juvenilia, but not a member of the "Bayreuth Ten". It is a remarkable opus in how it unfolds in the framework of an earlier idiom - French grand opéra - and yet still foreshadows the later Wagner. This will not be the first time Müpa Budapest has presented this unique treasure from the composer's ouevre as a concert performance.

Wagner was 24 years old in 1837 when he read the novel Rienzi about the last Roman tribune by the English writer Edward George Bulwer-Lytton (1803-1873), which resulted in plans for an opera being outlined in his imagination. After completing the libretto in 1838, he set to work composing the work during the period he was working as a conductor in Riga. He intended to offer the work to the Paris Opera, which explains why the five-act Rienzi complies with the rules of French grand opéra in every ...respect. In spite of Meyerbeer's support, however, Paris showed no interest in the work, so the work was eventually first staged in Dresden in 1842, where it was a success. The music for this historically themed piece set in 14th-century Rome is rich and written with inspiration, in poetic passages. Portraying Irene in this Budapest Wagner Days concert-version production will be Sara Jakubiak, an American soprano of German and Polish descent. The role of Steffano Colonna will go to the Austrian bass Günther Groissböck, who in recent years has been enchanting audiences in the operas of Verdi, Wagner and Richard Strauss. The critic from the New York Times has praised his most recent new effort, as Baron Ochs in Die Fledermaus at the Met, in superlative terms as well. Our fellow Hungarian Dorottya Láng, who will appear as Adriano, has enjoyed significant success abroad, and taking the podium for the performance will be the excellent German opera and concert conductor Marc Albrecht.

We inform our esteemed audience that this performance of Wagner's opera Rienzi will begin at 18:00. 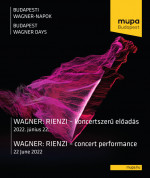 Change
We inform our esteemed audience that this performance of Wagner's opera Rienzi will begin at 18:00.