A detective story: the Hungarian National Dance Ensemble's large-scale première of The Faithless Wife casts light on the hidden aspects of the original ballad. This full-evening "crime story" of a dance drama takes as its starting point Barcsai's Lover, one of the most estimable of Hungary's balladic treasures. After cuckolding her husband, a wife awaits a terrible punishment. But how did things actually get to this point? Zoltán Zsuráfszky and Zsuzsa Zs. Vincze's production ponders the causes, while also bringing to the stage such eternal themes as fidelity, love and revenge.

Barcsai's Lover, an old Szekler folk ballad that has survived in several versions, is permeated with deep passions and emotions, The essential situation is a familiar one, regardless of time or place: something is not at all right in the relationship between the wife and her husband. The troubles begin when it turns out that the wife is incapable of getting her former lover out of her mind. Meaning that everything is in place for the tragedy that is now about to start. Zsuzsa Zs. Vincze's ...libretto, however, does not satisfy itself just with the story and its many omissions and silent details: she also develops the antecedents, conjecturing what lies behind the vengeful husband's awful deed. None of this, however, comes close to meaning that the creative team are lightening the creepy atmosphere of the original ballad. Quite to the contrary: Kázmér Tóth's sets and Zsuzsa Zs. Vincze's richly decorated and stylised folk costumes will create a monumental, nearly operatic, visual spectacle. Credited alongside folk music curators István Gázsa Papp and Sándor D. Tóth for his multilayered musical material is composer Benjámin Eredics, who has created a choral work of overwhelming power for the Honvéd Male Choir. This production by Kossuth Prize-winning director/choreographer Zoltán Zsuráfszky is a wonderful vision that bridges genres and styles.

A joint production of the Hungarian National Dance Ensemble as part of the Bartók Spring programme, The Faithless Wife is being brought to the stage by Müpa Budapest. 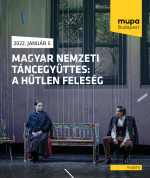