After taking inspiration from Bartók and Kodály in previous productions, the Hungarian State Folk Ensemble is again turning to Hungarian classical music for inspiration, this time to the work of Ferenc Liszt. The group wishes to see itself and be seen in the reflection of the genius's epochal oeuvre. On this occasion, the creative team is being motivated by more than the wish to pay tribute to Liszt: there is also the conviction that his greatness as a composer and performer has a valid ...message perhaps even for our own era, along with a lesson for our modern present.
Liszt Mosaics is founded on three thematic pillars. Although all three directly evoke Liszt - with emblematic aspects of his life's work: Liszt the Hungarian, Liszt the priest and Liszt the virtuoso - they speak at least as much to us as people of the 21st century. The works can also be regarded as the creative team's artistic credo of considering the interdependence of thematic layers and how they are defined by each other: Liszt's Hungarian identity, his bravura and talent as a performer, and the public disclosure and testimony of his personal life of faith.
This dance concert - performed in the languages of both music and movement - features, in addition to works by Liszt, some of the finest pieces of Hungary's national romanticism that served to inspire them, antecedents of sacred music reaching as far back as the Gregorian period and compositions by contemporaries who influenced Liszt: Paganini and Chopin.
In reference to Liszt the world traveller, the performance space is a 'concert hall', perhaps somewhere in the wider world, but also possibly in the 'here and now'. Time on the stage is both virtual and actual: it is not specific and cannot be defined historically, so our own 'present' cannot be distinguished. In this concert hall ruled by music, dance and voices raised in song, these mosaics arrange themselves into a single, grand tableau to bring the past to life and find the roots of our own present.

The première was a co-production of Müpa Budapest, Hungarian State Folk Ensemble - Hungarian Heritage House and the National Dance Theatre. 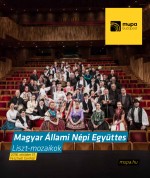