If once there existed a state of primordial unity, then all souls originated from the same source. Ever since, in their human incarnations on earth, fragmented souls have been in search of others so that once again they might be made whole.
Non Solus is the story of two humans finding one another, and exploring the innermost depths of their imaginations. It is a perfect union in an imaginary space spun from illusions created by two seemingly very different, yet closely related, discipline...s: dance and circus.
The contrast is extended through the synchronicity between the performers and their physical setting. Humanity's journey from birth to death is depicted in the context of an apparently living, breathing, organic stage set. This symbiosis between living and non-living materials, between the artists and their setting, propels the story forward to its inevitable conclusion.
Classical compositions by Bach and Rachmaninov are alternated with electronic and contemporary organ music to create an innovative aural space that reinforces the dramatic shifts unfolding on the visual plane.

The performance is recommended for those aged 12 and over.

The première was an event of the CAFe Budapest Contemporary Arts Festival.

We regret to inform our esteemed audience that the performance has been cancelled due to illness. Valid tickets can be redeemed at Müpa Budapest's main ticket offices until 26 February 2019, or are exchangeable at their original value for any performance produced by Müpa Budapest.

The next Non Solus is scheduled for 4 July 2019, tickets are available. 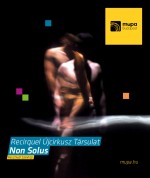 The next Non Solus is scheduled for 4 July 2019, tickets are available.