A century and a half ago in Saint Petersburg, a civil servant lived a double life for many years: by day he busied himself with official documents and sombre files, but as soon as he put down his pen and sleeve protector he would give himself over to composing operas and songs, or meeting with his fellow musicians in someone's home to plan the renewal of Russian music. At an exhibition held following the death of a painter friend, he was seized with the desire to evoke the paintings in the langu...age of music - in the form of what is known as programme music. Thus was born Pictures at an Exhibition, the cycle for piano by Modest Petrovich Mussorgsky. 'Hartmann [the painter's name] is seething as Boris [Godunov, the opera] seethed,” the composer wrote in a letter. "Sounds and ideas hang in the air; I am gulping and overeating, and can barely manage to scribble them on paper. I want to work more quickly and reliably. My own physiognomy can be seen in the interludes. So far I think it's well turned.” Just how well he succeeded is proven by the work's enduring popularity. Some decades later, the piano work would be arranged for orchestra by the French composer Maurice Ravel, and it is the latter version which is now most frequently heard. But how can one write music about pictures? How do the sounds of the piano and the orchestra differ, and what different possibilities are contained in each? What makes Mussorgsky's work so exciting? The conductor Ádám Cser and the moderator at this concert will seek answers to these questions. 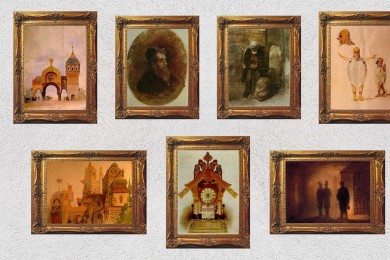