It is a tradition of long standing for the Hungarian National Philharmonic to celebrate the holidays with the immortal Christmas story of one of Tchaikovsky's most popular ballets. In the words of music critic Kristóf Csengery: "The overall effect demonstrated the beneficial and refreshing intention of avoiding traditional ballet. This intention finds its way within the marriage of puppetry and a special form of movement theatre treating puppets and humans as equal partners and using uniqu...e tools to bring the more strident world of a marketplace Punch and Judy show into an indoor space, at times riveting the audience with solid acrobatics borrowed from the circus while functioning as a pantomime at others. All told, the overall effect is a heterogeneous one, but one that produces excellent results. Innocent humour, fresh playfulness, plenty of new ideas, and an appealing visual style that never contradicts the spirit of the music. The sets are exploited simply, but inventively (in both the horizontal and vertical dimensions) in the enormous interior space of the stage of the Béla Bartók National Concert Hall, where colourful costumes bring the fairy-tale world to life. […] The Nutcracker is a theatrical work, and of course one with a plot, and as such also depicts conflicts and dramatic events. Nevertheless, I felt that it was not the "mythical clash” between the Nutcracker and the Mouse King that formed the core of this production (although this took place too, naturally), but rather the timeless shared feeling, the joy, the beauty and the melodic and harmonic artistry and grace of the dances coming one after another and surpassing all forms of narration.” 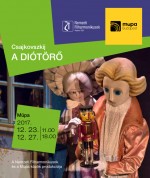