Films have their own fate. They are subject to the time and culture in which they are created. Sergei Mikhailovich Eisenstein's film, Alexander Nevsky demonstrates this unequivocally. In the story, Alexander Nevsky defeats the Teutonic knights in the Battle of Lake Chudskoye. The idea of defending the Russian homeland against the Germans seemed appropriate in 1938. Then came the Molotov-Ribbentrop pact and the film was banned. In June 1941, the Germans attacked the Soviet Union and the film returned to cinemas.

We are presented with one of the most precisely planned works in film history as Eisenstein, in addition to sketching out the plot, dialogues and music, also imagined the relationship between light and shadow, as well as the dynamics of the scenes. The film practically begins with still images, but it becomes apparent within minutes that these pictures are moving and telling stories in the company of Prokofiev's music. It also becomes clear that the director uses the language of film entir...ely in his own fashion. The movement and gestures of the protagonists still betray the traditions of expressionist silent films, yet this is a sound film in every sense with its tough, forthright dialogue, while the film also serves as a kind of history lesson of the age of conquest of the Russian Tatars. And then we hear the return of Prokofiev: the individual chapters are accompanied by incredibly powerful symphonic episodes. It is not a case of the score reinforcing or serving as a counterpoint to the ideas on screen. Here, we are in the world of opera where the music at once creates a backdrop and builds drama. Alexander Nevsky is in some sense a Gesamtkunstwerk, a total work of art, as, in addition to the above, the constructed sets and costumes are extremely strong components of the film. This is how a film made more than eight decades ago can still be enjoyed to this day.

In Russian, with Hungarian subtitles.
The discussions before and after the screening will be conducted in Hungarian. 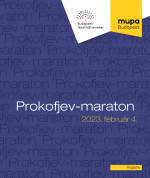