The idea for The Grand Chinese New Year Concert, which goes on tour every year, is to bring together the classical music traditions of East and West, as well as the cultures of Europe and Asia. Ever since 1998, this unique musical undertaking has enchanted audiences from the Wiener Musikverein to the Amsterdam Concertgebouw and the Berliner Filharmonie with classical Chinese and traditional instruments, fitting costumes and musicians from China's leading ensembles.
The Chinese Traditional ...Orchestra of the China National Opera and Dance Drama Theatre, founded 50 years ago, is modern China's first orchestra dedicated to preserving national traditions. Its primary goal is to perform and preserve the country's traditional operas and dance theatre, and to introduce these works to younger generations. The ensemble takes special care to ensure the quality of its interpretations is always of the highest quality, so it only works with the country's finest musicians and dancers. It is continuously expanding its repertoire through research into music history and is known for performing rarely heard works interspersed with more popular pieces. The orchestra regularly participates in various international music competitions, returning home with prestigious prizes. Countless CDs and video recordings also attest to its successful performances. In recent years, the musical heritage of Hong Kong and Taiwan has also been incorporated into the ensemble's increasingly broad programmes.
The orchestra's permanent conductor Hong Xia is popular with audiences primarily for her passionate conducting, attention to detail and expressive style. She is able to move with ease between Chinese and foreign, classical and modern, traditional and symphonic works, guiding her musicians with a sure hand through each genre. 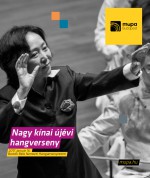