They are as familiar a sight in the world's leading concert halls as they are in the Guinness Book of World Records, into which they have been entered on three occasions, each time for assembling several thousand musicians - all playing the same instrument - and popularising such archaic instruments as the erhu, a two-stringed violin, the dizi, a member of the flute family, and the taiping gu, a percussion instrument.
The 91-member orchestra consists of four groups: strings, plucked i...nstruments, winds and percussionists. The histories of some of these instruments go back thousands of years, even if they have since been modernised in order to perfect their sounds. However, freshness, creativity and experimental attitude are no less important to this orchestra than preserving and nurturing the ancient tradition is, which has deservedly earned it the title 'Hong Kong's cultural ambassador'.
Their chief conductor, Yan Huichang, has led the Hong Kong Chinese Orchestra since 1997. With their New Year's concert, they will bring traditional, reworked and contemporary pieces from a distant and once-again flourishing culture within reach, with unheard-of virtuosity, astonishing monumentality and in the unique arrangements that have made the Hong Kong Chinese Orchestra a one-of-a-kind ensemble in the world. 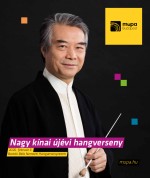