One hundred years is a long time. Today, when we look back on the century that has passed since the Trianon Peace Treaty, we tend to think it better to do so in a dignified manner. Without complaining or making threats. Avoiding pathos and false self-pity. The Hungarians who remain in the parts of the country separated from Hungary in 1919 remind us of the struggles of the past century not only through their very existence, but also with the gems of our culture that they continue to preserve.

The Fonó Band's new production was created for the 100th anniversary of the separation. This concert, which features some special guests — all traditional performers — alongside the band, is centred around the idea that, 100 years after Trianon, you can still find the living traditions of Hungarian folk songs and instrumental folk music in the Hungarian diaspora residing in various regions of our neighbouring countries. Their music retains immense significance, not only because... these people have been separated from their homeland, but also because there is a common perception that folk music belongs either in the archives or, at best, in the hands of various revivalists and reinterpreters. The Witnesses show will feature some remarkable traditionalist performers who — one century on — continue to preserve the ancient Hungarian traditions of their own territory. Through their incredible knowledge and ability, the ancient glory of a largely forgotten and fading heritage is kept very much alive. In line with Béla Bartók's Carpathian Basin concept, in addition to Hungarian folk music values, the concert will also present some authentic performances inspired by traditional Slovak, Transylvannian Romanian and Rusyn musical cultures. As well as the members of the Fonó Band, the production will also feature traditional singers and musicians who hail from the Hungarian populations of Gemer and Zoboralj, Transcarpathia, Vojvodina, Țara Călatei and the Transylvanian Plain, the Szeklers of the Nyárád river-lands and the Csángós from Ghimeș. The concert will feature selected works from Kodály and Bartók, as well as some musical themes familiar to many Hungarians from singing and music textbooks. Most of them will be performed in a special version, where we will encounter some of the greatest pioneers in Hungarian music folklore. You will also find that the lyrics of the folk songs are full of the distinctive sentiments of a minority existence.

This production is being staged as part of the 'Year of Solidarity' programme series. 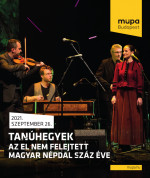