Joining this superb Dutch chamber orchestra will be a world-famous Swedish soprano and a Swedish trumpet virtuoso to play an excitingly diverse programme that focuses on the Advent season. We'll get to hear a concerto by Telemann, followed by a reverent movement from one of Beethoven's string quartets as transcribed for chamber orchestra. Also awaiting us will be a Bach cantata and an aria by Handel, as well as some traditional Swedish Christmas songs. Stylistic travellers: your destination is Müpa Budapest!

The Amsterdam Sinfonietta was founded in 1988 by its first artistic director, the Russian conductor Lev Markiz, who turns 90 years old this year. An important element of the ensemble's artistic philosophy is performing music without a conductor, which demands a great deal of commitment from the members to play as chamber musicians. Just as essential to them is their innovative policy in constructing concert programmes, which ventures beyond the Baroque and Classical repertoires to include numero...us rarely heard works from the 20th and 21st centuries, as well as new works. Their concertmaster, Candida Thompson, who will also play as a soloist at the concert, studied at London's Guildhall School of Music the Banff Centre for the Arts in Canada. She has served as Amsterdam Sinfonietta's music director since 2003. A member of the Royal Swedish Opera, the globetrotting Miah Persson boasts a rich repertoire ranging from Mozart, Berlioz and Verdi to Bizet, Richard Strauss and Britten. Håkan Hardenberger pursued his musical education in Paris and Los Angeles and has been one of the greatest masters of his instrument for decades. In addition to playing the classics, he spices up his concert programmes with numerous moderns works, and he has been amassing an impressive discography since 1986.

Tickets
The discounts of the Müpa+ membership programme will be appliedfor this performance, and we also credit membership points. 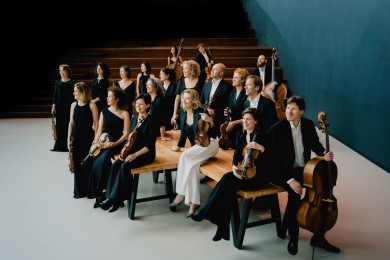