Three works of German Romanticism: one from 1821, another from 1847, and the third from 1878 - one overture, one symphonia and one violin concerto. The overture invites us into the fairy-tale world of the German forest. The symphony follows the Beethoven dramaturgy of the triumph of the will over fate, and the violin concerto also owes something to the towering Viennese Classical composer. We have all heard the evening's experimental-minded conductor, who is also well versed in contemporary music, perform in several important concerts, while the 21-year-old soloist has all the skill and training required to become a leading player in the concert world of the coming decades.

Conducting the two purely symphonic pieces - Weber's enchantingly atmospheric overture to Der Freischütz and Schumann's passionate Second Symphony, with its unleashing of stormy emotions, will be Gergely Dubóczky. After earning his degree, the conductor worked as assistant to Zoltán Kocsis at the Hungarian National Philharmonic, taking part in master classes with Péter Eötvös, Erwin Ortner, Sir Simon Rattle, Bertrand de Billy, Daniel Harding and other artists. He has his own ensemble, the ...Budapest Sound Collective, and has served since 2009 as the artistic director and conductor of the Medical Orchestra of Semmelweis University. Starting in September 2014, he spent five years at the helm of the Béla Bartók Conservatory Orchestra, and he also worked as the artistic director of the Alba Regia Symphony Orchestra between 2018 and 2020. Taking the stage to perform the Brahms violin concerto, with its world of grand gestures and wide horizons of sound, will be the Jamaican-born soloist Ellinor D'Melon. The young musician took her first violin lessons at the age of four, and by eight had been accepted to the Yehudi Menuhin School of Music in London. Later on, she honed her skills at Madrid's Escuela Superior de Música Reina Sofia under the guidance of renowned professor Zakhar Bron.

We regret to inform you that the concert has been cancelled. 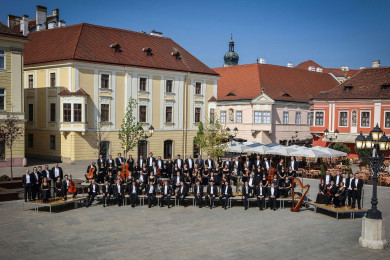