The closing event in the Kurtág 95 birthday concert series offers the audience a look at 15 short films created by the composer's granddaughter, video designer Judit Kurtág. Most of them are made up of previously unreleased private footage of György and Márta Kurtag in their most personal creative enviro...nment. These film scenes at the concert link together the musical miniatures being played from the series Signs, Games and Messages. The performers taking the stage are musicians who have collaborated with the Kurtágs for many decades.
The selection of videos assembled by photographer, fine artist and filmmaker Judit Kurtág will segment the concert with brief film clips that will fascinate viewers not only with their look into their subjects' personalities, but also through the way that they show the couple from a perspective that is inaccessible to the outside world: how the music is composed, how they discuss the completed passages, and their life at home together executing pieces for four hands at the keyboard, reciting poetry and playing around with each other, not to mention the silent scene, shot from outside a window, of them tapping out on the glass pane the piano piece that could be considered the motto of the Kurtág oeuvre: Flowers We Are, Frail Flowers. As far as the music being presented between the videos goes, the pieces - with two exceptions - are Kurtág miniatures that either are being performed by an artist personally linked to the Kurtágs or convey deep layers of personal meaning to them. The selection embraces practically the entire oeuvre, with a programme that incorporates a composition written in the early 1970s (Splinters) just as it does a completely fresh one from November 2020 (Márta's Ligature). A good portion of the movements to be played come from the Games series. 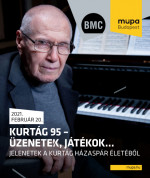