2019 was the last year when we could enjoy the return of Der Ring des Nibelungen to the Budapest Wagner Days live, then fans of the tetralogy once again saw their favourite performers, but this time with completely transformed choreographies and stage action, as well as 16 hours of never-seen-before vide...o footage projected on the set and backdrop. The work of the creative team for each production was supported by the addition of a new dramaturg.
Constituting the Vorabend or ‘preliminary evening' of the cycle, Das Rheingold is full of bright colours, humour and irony, and is more fairy tale than myth. With great narrative gusto, Wagner presents the Fall: the craving for the treasure - and power - that has everyone in its thrall. Along, of course, with the story of Wotan's arrogant architectural folly: he is bent on having Valhalla and will pay any price for it... The society of gods clearly resembles the human world: everyone is just as petty and fallible as the people we encounter in our own lives.
One thing constant about the production is Ádám Fischer's perfectionism and the deep humanism of his conducting, as well as the rich imaginativeness of the core concept of Hartmut Schörghofer's production. There was a change of personnel in the central role. Following James Rutherford's turn at the role in 2017, in 2019 we welcomed back the wonderful - and very versatile - Danish baritone Johan Reuter as Wotan. Two other important roles remain in the same safe hands as last time, with the outstanding Péter Kálmán as Alberich and Gerhard Siegel as Mime. Zsolt Haja (Donner), Atala Schöck (Fricka) and Lilla Horti (Freia) are also familiar from the 2017 cast. For those who have never warmed to or really known Wagner, it would be sound advice to start with Das Rheingold as the work to ‘master' the composer - and to cultivate the urge to see and hear the other three works in the tetralogy.

A music drama in four scenes (Updated version of the renowned production, in German, with Hungarian and English subtitles).

This recording was made at the performance held at Müpa Budapest on 13 June 2019. 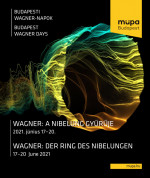