This is a story known by everyone. The image of two siblings Hansel and Gretel gazing in wonder at a gingerbread house built by a wicked witch in a deep, dark forest has become part of the shared memory of generation after generation, thanks to Grimm Brothers' popular collection of fairy-tales. In Humperdinck's work, the most successful German fairy-tale opera ever, which has been performed all over the world, the emphasis shifts slightly however, and the fairy-tale heroes show a new side, though here too story enjoys a happy ending.

Engelbert Humperdinck was 29 years old when he gained his first great international success with his children's opera, Hansel and Gretel. The fact that it was genuine family entertainment is confirmed by the story of the work's creation. Adelheid Wetter, the composer's younger sister, had been planning to put on a 'nursery theatre' as a surprise for her husband's birthday, but the few songs they wrote together were soon developed into an entire opera. The creative pair ended up making some... significant changes to the original work. The wicked stepmother was replaced by the children's mother, who drives them into the woods. Humperdinck, who was a Wagner enthusiast and assisted the German maestro in the premiere of Parsifal, created a partitura which is absolutely exemplary in terms of its passion, reasoning and construction. To show us that the story of Hansel and Gretel holds true not only in the pages of a fairy-tale book but also on the opera stage, we can enjoy the playing of Sinfonietta Erudita, conducted by Péter Oberfrank, along with the director Sylvie Gábor. 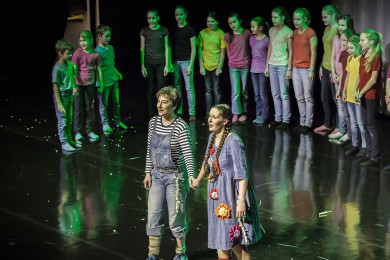